Suganya a "jack of several arts" 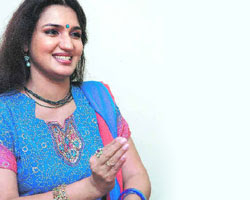 Suganya is now considered to be a `jack of several arts'. Versatile dancer and actor, she has also written lyrics and composed music. She has even crooned songs. Suganya talks about herself, her films and also her prized possessions.

I am a practical and simple person. I am an ardent fan of any kind of art like music and dance.

So far, I have done 90 films. But still I remember how director Bharathiraaja selected me for "Puthu Nellu Puthu Nathu." The credit for bringing out my acting talent goes to my guru.
I love all the roles I performed. It is difficult to choose the best from the films I did. Besides "Pudhu Nellu Pudhu Nathu", I have some very good films such as "Sagaram Saakshi" (Malayalam) and "Chinna Gounder", "Thaalattu", "Walter Vetrivel" and "Indian". Another best film from Malayalam is "Kana Kinavu", which received the Nargis Dutt award.

My `Azhagu' cassette was a success. I wrote the lyrics and also composed the music for it. People appreciated my work and congratulated me. I was particularly happy with the recognition from poet Vaali, who lauded the lyrics particularly `Kattalai' song. I was really thrilled. On my request he gave me an appreciation letter. It is now among the collection of appreciation letters given by Ilaiyaraaja, S. Janaki, and S.P.Balasubramaniam. For me it is a treasure. In fact Vaali asked me to continue writing.
Another person who congratulated me was Sowcar Janaki, especially for my old woman role in "Indian".
My lyrics for the second album is ready but I am not getting time to sit with musicians to compose the tunes. I need a week's time to make the lyrics into songs. There are love songs and also songs on other themes.

Recently I got an offer for singing in an advertisement jingle. I sang the piece. Then they asked me to sing all the ten verses in the song.
I recently shot two short films in London. One is about dance and the other is a good social subject. They are titled "Check Mate" (directed by Siva) and "Shanthi" (Nithyanandam). Both have come out very well.
I do not think acting in small screen is in anyway inferior to the big screen. In fact, a good actor would prefer performing in the small screen as it allows a person to display versatility.
Posted by Suk_Fan at 7:07 AM