Dancing to the tune(Excellent Performance) 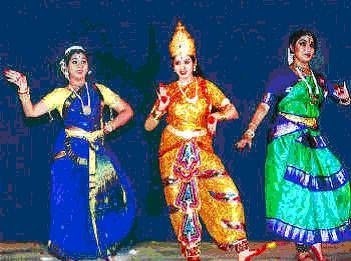 (From right) Suganya, Gayatri and Keerthana perform at `Paattum Bharathamum'

IT WAS quite an unusual programme - hit film songs, old and new. But what made the difference was that the songs were all dance numbers, and popular film and TV personalities danced to these tunes.
"Paattum Bharathamum" held by Bharathakala Academy in association with DLM Digital studio and Kosmic group featured actresses Suganya, Keerthana, Gayathri and actor Ramji all of whom had the audience spell bound.
The special dance movements were choreographed by Pushkala Ramesh. The proceeds went to V-Excel, an organisation working for physically and mentally-challenged persons.
Kandasamy Bharathan of Kavithalaya gave Rs.60,001 and Tamil Film Producers Council president `Sathya Jothi' Thyagarajan gave Rs. 10,000. Film star `Jayam' Ravi, who was the chief guest, felt that such programmes helped to elevate the taste of audience. Music director Deva wanted to hold the similar programme in other places also.
Posted by Suk_Fan at 7:55 AM