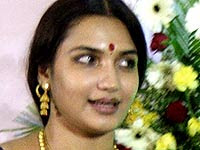 Bitten by the music bug is Sukanya. The yesteryear heroine of Tamil cinema, Sukanya had recently played a mother's role in P Vasu's Thottal Poo Malarum.

The actress is on a visit to London and once she returns to Chennai she would commence works to come out with a devotional music album.

Sukanya, an acclaimed dancer herself, had released an album last year titled Bhakthi. Plans are on to get prominent singers sing in the album, which would be released before this year-end.
Posted by Suk_Fan at 7:37 AM